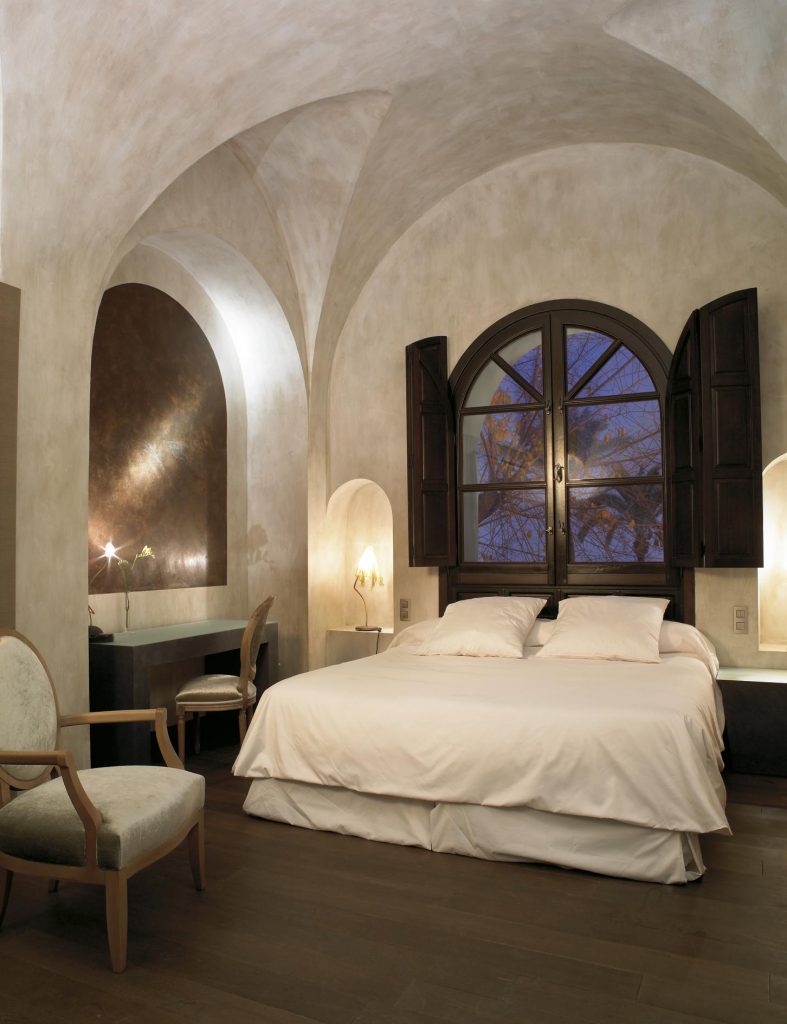 Hospes Palacio del Bailío is a magical hotel located in the heart of the historical and ancient city of Cordoba. The unique hotel represents a choice to those who seek culture, well-being, art, history, gastronomy and rest. Hospes Palacio del Bailío is the first-five star Hotel in Cordoba, built between the 16th and 18th Century. The hotel has very clear and unique characteristics of art, history, gastronomy and relaxation. The splendid garden along with the Roman remains, the carriage houses and the barns contribute to a balance between design, history, harmony, space and light. In 1982 it was declared property of cultural heritage interest under the category of Monument, remaining an old “ancestral home” of which the original features of the house have been preserved for us to understand the historic past of the city of Cordoba. The five star Hotel endows its exclusive clientele with 53 spacious rooms with views upon the remains of a Roman house, diverse patios, meeting rooms, the Senzone Restaurant & Tapas Bar, the Arbequina’s Gastronomic Restaurant and the Bodyna Spa that offers everything you can wish for to relax and regenerate. Going back into history, the Palace had versatile owners: from the Romans, Muslim dwellers, Bailío (knight-commander) – after a significant segregation in 18th century it was the Post Office and Civil Guard Headquarters, as well the home to noblemen, soldiers, civil servants and finally, Mr. Castejón, professor of the Veterinary Department of Córdoba University. The palace is an old manor characterized by its grand size, its courtyards and its limestone structure coated with limestone mortar and by its 4 one of a kind andalucian-style courtyards adorned with flowers, fruit trees and aromatic plants.The central courtyard measures 160 m2 with glass flooring which reveals traces of an impressive Roman Villa from the first Centrury b.c. It is also the only Hotel that is located in an oasis surrounded by fruit trees and aromatic plants. All of its original features have been preserved thanks to the great efforts that were put in on its restauration in order to conserve its historical characteristics typical to the city of Córdoba. Its original art galleries and frescos from the 17th Century within the rooms and common areas are the most beautiful pecularitites of this unique hotel. The guests can live the incredible experience of enjoying this charming boutique hotel in Córdoba in Andalucía. A hotel with five star service that allows you to taste the flavours of the earth in the Arbequina Restaurante & Tapas Bar, a venue where you can go to relax in the impressive garden of protected species, or a stopover where to have an aperitif looking over the traces of an old Roman house or relax in the Bodyna Spa that includes the only roman baths in the city. Since its opening, the Hospes Palacio del Bailíohas already been listed with the most prestigious hotels of the world and blessed with a number of highly acclaimed prizes and awards: